City of Cornelia officials, citizens, and the project team for the new Cornelia municipal complex gathered together on August 15, 2020 for the dedication and open house of the new municipal facility.

Cornelia City Manager, Donald Anderson, announced that the municipal complex would be dedicated to 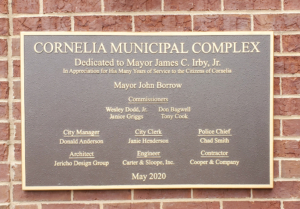 former City Mayor J.C. Irby. Irby served as the Cornelia Mayor for 8 years from 2012 to 2020. The building’s dedication plaque aimed to recognize his efforts in the project while also recognizing new mayor John Borrow’s ability to see the project through until completion.

Representatives from the city, Engineering firm Carter & Sloope, and Cooper & Company joined in the dedication ceremony hosted for the general public.  Cooper & Company Vice-President, Jim Cooper, spoke on the collaborative effort between the officials, Jericho Design Group, and Carter & Sloope to get the job completed swiftly despite record wet weather and during the COVID-19 crisis. 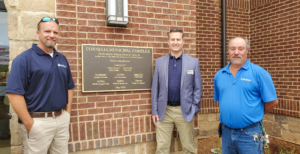 Jim Cooper also recognized the outstanding work of Cooper & Company’s Project Executive Chris Ritchie, Project Manager Ken Voyer, and Superintendent Perry Atchley for their outstanding work and diligence throughout the entirety of the project to get the certificate of occupancy for the facility that will house both the administrative functions and new police facility for the city.

Chase West from Carter & Sloope also spoke on the early processes of the municipal complex and choosing Jericho Design Group as the project architect.

Chase West, representative from Carter & Sloope stated that the city was keeping “their staff close to downtown and therefore supporting the businesses of downtown. And they’re keeping the heart of community in the center of downtown.” The sense of place was critical and important to the city, really making this building a focal point was a critical during the conceptual phase of this project.

City of Cornelia citizens and members of the general community were treated to light snacks from local bakery Sugartopia along with the opportunity to tour the two-story, 25,175 SF facility.  Cornelia police used the opportunity to educate the public about their armory, secured evidence storage, etc. 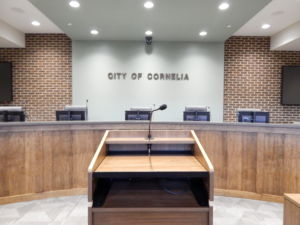 When fully complete later this fall, the municipal complex will also feature a 16,876 SF fire station that will significantly upgrade the facilities for the men and women who serve the city.  In addition, Cooper will be demolishing the existing police facility and adding additional 31 parking spaces in the rear of the new facility..

The municipal complex is located at the corner of S. Main Street and Foreacre St in Cornelia, GA near the Big Red Apple.