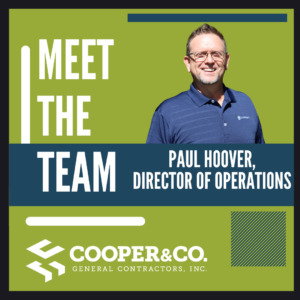 An industry AEC veteran has joined the Cooper & Company team.

Paul Hoover, a longtime and well-known architect in Northeast Georgia, will serve as Cooper & Company’s Director of Operations. He begins his role on September 1.

Paul is the former Vice President of an architect and engineering firm where he worked since 1998. While there he built his career as a project manager, project architect, architectural department manager and then vice-president. He oversaw the growth and success of the firm in addition to managing staff workloads, continuing education, proposal development and presentations.  In his role he also oversaw projects, tracked budgets and ensured successful completion.

Paul is a graduate of University of North Georgia and Southern Polytechnic State University with a Bachelor’s degree in Architecture. He is a licensed architect and interior designer.

“Paul will be a valuable and welcome asset to the Cooper team,” Cooper President Steve Cooper, said. “His experience, connections and knowledge of the AEC community will provide the oversight and expertise we need in our operations department. We are thrilled to have him join our firm.”

Paul is stepping into the operations role currently held by Ray Neal who is transitioning to focus on his role as President of Sovereign Cooper, a joint venture firm of Cooper & Company and Sovereign Construction & Development.