Students, faculty and staff started the 2019-2020 school year off with a new look at Lilburn Middle School. Cooper & Company completed a five-phase addition and renovation to the school.

to the band room, classrooms, and restrooms.  During this project, Cooper also oversaw the demolition of an existing one-story wing to provide construction of a new three-story wing and administrative space.  This addition to the school was 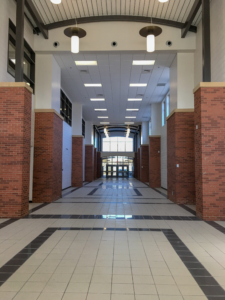 open for students during the second half of the 2018-2019 school year.  Cooper also completed several interior renovations for the third phase of the project during student breaks.  These renovations provided 56 water source heat pumps, boilers, cooling tower, a generator and included the installation of new ceilings, tile, carpet, and paint.  Improvements were also made in the cafeteria.

Throughout the winter and summer of 2019, additional demo work was conducted on the existing building structure as well as extensive site-work.  This work was conducted in preparation for the final phase which added new offices, classrooms, doors and lighting and the stage floor in the drama room. 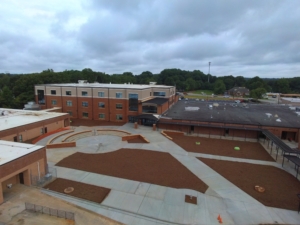 existing parking lot, install and outdoor classroom/amphitheater, and three new canopies to create synergy between the exterior façade of the older administrative area and the new three-story addition.

This work was completed in just seven weeks.  It was not completed without challenges.  The tight time line and some rather extensive issues with the elevation of the site conditions put this project at risk of not being completed on time.  However, between our Director of Field Operation, Senior Project Manager, and the Project Manager for Gwinnett County Schools, our efforts found a workable solution to get the right layout for the curb, gutter, and new asphalt down before the teachers arrived back to class.

All of the phases were completed successfully on time for the students and staff before the first day of the school year. Senior Project Manager Gary Goodman knew the stress of the timeline was worth it when he saw the faces of Lilburn Middle School community as they saw the finished renovations.

“This school needed improvements for a long time and you can tell people were excited about them. I got lots of positive comments from the school superintendent to custodians and everyone else in between.”

Lilburn Middle School is located at 4994 Lawrenceville Hwy in Gwinnett County. Cooper appreciates the trust the Gwinnett County team showed in our firms’ ability to add additional work within a tight time frame.  We enjoyed working alongside CGLS Architects, Inc. and the Gwinnett County Board of Education throughout this entire project.